It twists and undulates as if caught in a breeze that will lift it up and away into the sky. It surges, billows and rolls. It swells up and ripples down. It swings and whirls and weaves and oscillates. And yet the latest addition to the Norval Foundation’s sculpture garden in Cape Town doesn’t move at all.

The large-scale sculpture is by one of Britain’s best-known contemporary artists, Yinka Shonibare CBE, who has spent his life between England and Nigeria and, because of his intimate experience of vastly varied cultures, has an abiding interest in identity politics. He calls himself a “postcolonial hybrid”.

The Cape Town iteration of this huge work, Wind Sculpture (SG) III, is one of only a few in the world. A variation stands in New York’s Central Park and another is in London’s Trafalgar Square.

Shonibare says he is delighted to have this work permanently located in Cape Town. “I grew up in Africa and so I have a very strong relationship with the continent.”

Shonibare’s 6m-tall fibreglass work, painted in vibrant batik patterns, references the sails of ships, unfurling in the wind, particularly those vessels that transported Dutch wax-print fabrics to Africa. It is also thought to be a metaphor for ideas being exchanged among cultures.

“I set myself the challenge of creating what’s not there. It’s a lyrical, poetic task,” says the artist, referring to his attempts to manifest the invisible. 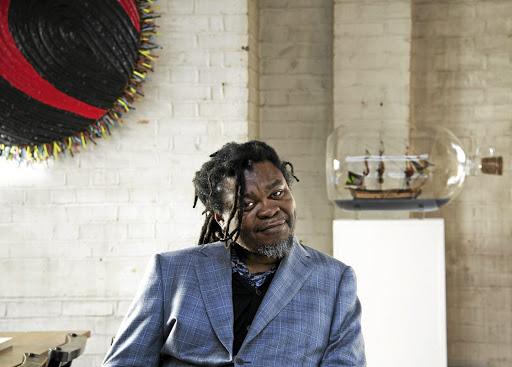 “We can’t see wind, but we do see its effects. Wind as a symbol of travel by ship, brought the diaspora from Africa across the Atlantic and into Europe and America. Wind-driven boats also carried the batik fabric common on the continent and thought of as an ‘African-textile’ – an identifiable marker of ‘Africanness’ – from Europe into Africa.”

These fabrics are not African in origin at all; in fact, says Shonibare, their origins highlight the messiness of colonialism and question the notion of cultural appropriation.

The Dutch, who had colonial holdings in Indonesia, were inspired in the 19th century by handmade Indonesian batik prints and started making these textiles industrially. Later the British followed suit.

In the words of art writer Beck Feibelman, “The British Empire introduced the patterns to their colonies in Africa, where they took off and became linked to some West African identities.”

“Many people think that these are authentic ‘African fabrics’, as I did,” says Shonibare. ‘”I like the ‘fakeness’ of that. I grew up seeing this distinctive fabric everywhere in Nigeria. But I didn’t know that we were being used as a market, that it was being sold back to Africa and this mythology of perception fascinated me.”

Shonibare’s inspiration for the wind sculptures comes from a previous public installation, Nelson’s Ship in a Bottle, from 2010, part of a series of temporary projects for the fourth plinth in Trafalgar Square. The artist built a scale-model of the HMS Victory in a huge bottle with all 37 of the warship’s sails remade in batik fabric, an obvious precursor to the wind sculptures.

The HMS Victory was Lord Nelson’s flagship at the Battle of Trafalgar on October 21 1805. Nelson advocated strongly against the abolition of slavery, and so Shonibare’s work, situated on Trafalgar Square close to Nelson’s Column, has a poignant political resonance considering the legacy of British colonialism.

Shonibare said at the time: “For me it’s a celebration of London’s immense ethnic wealth, giving expression to and honouring the many cultures and ethnicities that are still breathing precious wind into the sails of the UK.”

[Art] is a place where I can be angry, where I can shout, I can transform my anger into gold

The huge sculpture must surely also have resonance for Shonibare personally: it seems to move, but is in fact immobile – and when Shonibare was 18 he fell ill and was left completely paralysed.

With extensive rehabilitation, he overcame the initial total paralysis caused by transverse myelitis (inflammation of the spine) but was left partially paralysed (hence the tilt of his head). He is confined to a wheelchair.

He credits his art for pulling him through. “It is personal, it’s political, it’s a place where I can be angry, where I can shout, I can transform my anger into gold. For me … it’s a means of survival,” he said in an interview last year.

Shonibare’s primary preoccupation is with cross-cultural identity – the way that we all influence, borrow from, steal from, criticise and, if we get it right, respect each other’s cultures. This sculpture is part of the larger message of his work.

“I explore identity in practice and the mythology surrounding the authenticity of culture and identity by deconstructing history and reconstructing it from a different point of view,” he says. “I look at the past and explore the present through questioning established ideas of identity. Everything is hybrid. My work is a form of visual revolution that expresses this.”