Dog
In Pietermaritzburg, a woman has been reunited with her long lost German Shepherd, Lady, thanks to a Facebook group.

“I cried for months after she went missing. I am still in absolute disbelief that we actually managed to find her after a year,” said an emotional Celeste van Wyk after a fairytale reunion with her dog. 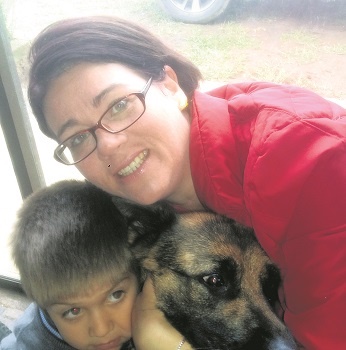 Van Wyk said Lady had been missing for over a year and she is extremely glad she is finally back home “where she belongs”.

Van Wyk told The Witness that one year ago she tried to rehome Lady, but the pet escaped from her new home.

“The people who took her contacted me the next morning to tell me that she had dug a hole under the fence and they [thought] she may have gone into the forest at Blackridge.

“I was heartbroken as I did not really want to give her away. We were struggling a little financially and wanted her to go to a good home,” explained Van Wyk.

“I searched for months [following her disappearance] but to no avail,” she said.

She said on October 10 this year while scrolling through Facebook she came across a page called Lost, Found & Adopt — Midlands, KZN and to her surprise, she saw a picture of Lady.

“I managed to get into contact with the woman who found her,” she said.

She said the woman who found Lady was walking her own dogs at the edge of the forest close to Liberty Midlands Mall when she found Lady.

“The woman took Lady home and she bathed and fed her and then took her to the SPCA.

“I am so thankful to her and can never express my gratitude enough,” said Van Wyk.

Van Wyk said she went to the SPCA to see Lady and confirmed that it was definitely her and that she wanted to “adopt” her and take her home.

“She has lost a lot of weight. Her condition is sad and her coat has also changed colour due to stress,” said van Wyk.

After going through the SPCA’s process of adoption, Van Wyk was finally able to fetch Lady and take her back home.

She is now back home with her family and Van Wyk’s 10 other dogs.

“It is still unbelievable that Lady is finally back at home with us again. She is happy and very protective of us.

“I believe that this is what fairytales are actually made of because you never hear of stories where people are reunited with their pets after such a long time,” said Van Wyk.

She added that she is very grateful to the SPCA’s staff and how professionally they handled the matter.

“I am hoping with a lot of love and care and the correct diet we can get her back to good health,” added Van Wyk.