The rhinoceros is a large, primitive looking mammal that dates from the Miocene era millions of years ago. In recent decades rhinos have been relentlessly hunted to the point of near extinction.

Since 1970 the world rhino population has declined by 90 percent, with five species remaining in the world today, all of which are endangered.

The white or square-lipped rhino is one of two rhino species in Africa. It in turn occurs as two subspecies, the southern and the northern. The southern dwindled almost to extinction in the early 20th century, but was protected on farms and reserves, enabling it to increase enough to be reintroduced. The northern white rhino has recovered in Democratic Republic of Congo from about 15 in 1984 to about 30 in the late 1990s. This population has been threatened by political conflict and instability. 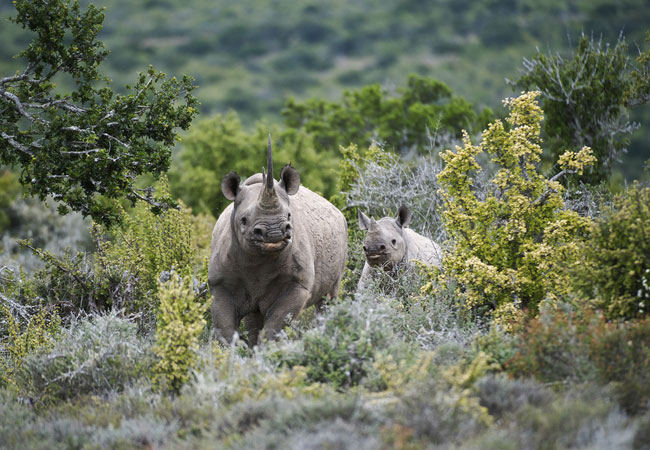 The White Rhino: The white rhino’s name derives from the Dutch “weit,” meaning wide, a reference to its wide, square muzzle adapted for grazing. The white rhino, which is actually grey, has a pronounced hump on the neck and a long face.

The Black Rhino: The black, or hooked-lipped rhino, along with all other rhino species, is an odd-toed ungulate (three toes on each foot). It has a thick, hairless, grey hide. Both the black and white rhino have two horns, the longer of which sits at the front of the nose.

The rhinoceros stands about 60 inches at the shoulder.

Black rhino is a browser, with a triangular-shaped upper lip ending in a mobile grasping point. It eats a large variety of vegetation, including leaves, buds and shoots of plants, bushes and trees. The white rhino is a grazer feeding on grasses.

Rhinos live in home ranges that sometimes overlap with each other. Feeding grounds, water holes and wallows may be shared. The black rhino is usually solitary. The white rhino tends to be much more gregarious. Rhinos are also rather ill-tempered and have become more so in areas where they have been constantly disturbed. While their eyesight is poor, which is why they will often charge without apparent reason, their sense of smell and hearing are very good.

They have an extended “vocabulary” of growls, grunts, squeaks, snorts and bellows. When attacking, the rhino lowers its head, snorts, breaks into a gallop reaching speeds of 30 miles an hour, and gores or strikes powerful blows with its horns. Still, for all its bulk, the rhino is very agile and can quickly turn in a small space.

The female family groups are often visited by mature males checking for females in estrus. Several interrelated family groups may inhabit an area and know each other well. When they meet at watering holes and feeding places, they greet each other affectionately.

Young are born after a gestation period of 16 months.

Man is the cause of the demise of the rhino. In the wild, the adult black or white rhino has no true natural predators and, despite its size and antagonistic reputation, it is extremely easy for man to kill. Sadly, black and white rhinos are under increasing threat as organised crime cartels target them for their horns. In fact, human beings continue to be the only predator against which these herbivorous giants have to fight.

The horns are believed to have a number of medicinal properties, none of which have been scientifically proven to be true. This “traditional medicine” industry is predominantly in Asia. Some of the applications of rhino horn include the treatment of various cancers, nausea, stomach maladies, hallucinations, snake bites, food poisoning and even demon possession. Contrary to popular belief, traditional Asian medicine does not prescribe rhino horn to treat impotence. However, since the rhino horn is made up of keratin (the same material as human nails and hair), it possesses none of these abilities in its own right.

Rhino horn is also used for intricately carved crockery and ornaments, which has become extremely valuable.

Another threat facing the rhinos of South Africa is the loss of habitat. South Africa is developing and growing at an astounding rate, and the natural areas are subject to urbanisation, logging, the building of roads, and the development of informal settlements.

By increasing awareness and appealing to visitors to be responsible tourists when choosing experiences and service providers, it is possible to make a difference and take an active stand against the problems facing rhinos.