The spotted hyena (Crocuta crocuta) has the strongest jaws in the animal kingdom. Of the three species of hyena in Africa, only the spotted hyena and the shy and much rarer, striped hyena (Hyaena hyaena) are found in East Africa. The smaller, and even shyer brown hyena (Hyaena brunnea) occurs only in southern Africa.

The Hyena ia a vaguely bearlike large animal with a sturdy build, high shoulders, and long muscular limbs. The hyena has a large head, broad, rounded ears. It’s coat is rough, comparatively short and is reddish brown to tan in color growing lighter with age. The tail and nose are black. Hyena are cunning and resourceful. Although usually considered scavengers (they pick over kills made by large carnivores and frequent rubbish dumps), they also hunt and kill a variety of prey. 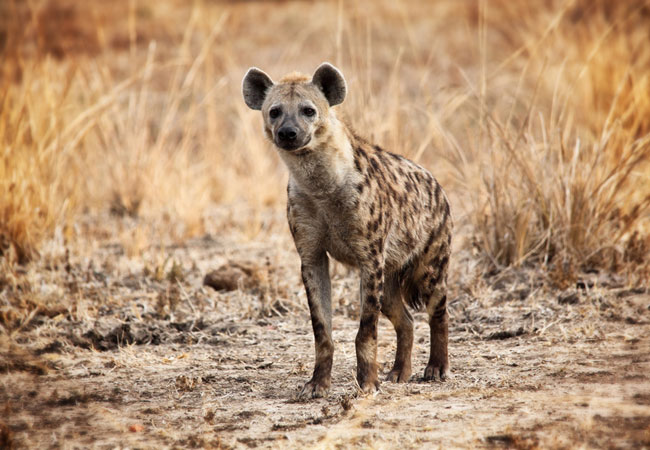 Hyenas stand 28 to 35 inces high at the shoulder.

Savannas, grasslands, woodlands, forest edges, subdeserts and mountains to 13,000 feet. The hyena is the most abundant large carnivore in areas where antelopes and zebras are found in masses. A formidable scavenger that lives wherever animal resources are adequate.

The hyena eats vertebrates of all kinds, especially hoofed mammals, it seldom eats invertebrates, fruits, or vegetables. Utilizes carcasses of large vertebrates more efficiently than other carnivores. Eats everything but rumen contents and horn bosses of the biggest antelopes, even deriving nourishment from mummified carcasses. Bones, horns, hooves, even teeth are digested completely within 24 hours.

Spotted hyaenas are social, gregarious animals, living in groups of as few as five or as many as 80 individuals. Intelligent and noisy, hyenas are different from most other animals, as female spotted hyenas are dominant over the males and outweigh them by about 3 pounds.