Chacma Baboons are the largest of the baboons. Chacma baboons have dark yellowish-grey to dark brown and almost black fur. Their faces are black with white hair below the eyes and on the muzzle.

The Chacma Baboon is a large primate with a dog-like face and large, prominent canines. A mature male measures 1.5 m from head to tail and weighs up to 33 kg, whereas the more slender female measures 1.1 m and has a mass of about 15 kg. 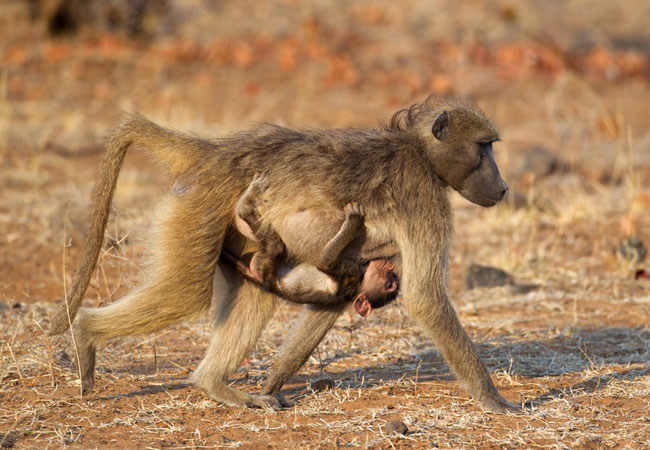 Woodland, grassland, acacia scrub and semi-desert habitats, including small hills, seaside cliffs and mountains up to 2980m, near to a freshwater source.

Southern Africa. In South Africa they are common in the Drakensberg, Cape Fynbos region and Succulent Karoo.

Grass, roots, tubers, fruits, nuts, invertebrates, small birds and mammals, and crustaceans when near the coast.

After a gestation period of 187 days, females give birth to one infant.

There are no major threats, but problem animals are often shot as vermin. They are also hunted locally as parts of dead baboons are sold in markets for traditional medicinal use, but this is not considered a major threat.