The largest African lesser cat and an exceptional climber and jumper, the caracal is a slenderly built cat with long legs and a short, sharply tapered tail. The Caracal resembles a cross between a leopard and a lynx.

Its coat is reddish-brown with distinctive tufted ears and white markings around its eyes and on its throat, chin, and belly. It is a skilled hunter and is literally able to “snatch” a bird out of the air. It has a powerful build and a leapord-like bark. Excellent tree climbers, caracal will drag take their prey into a tree to be eaten. 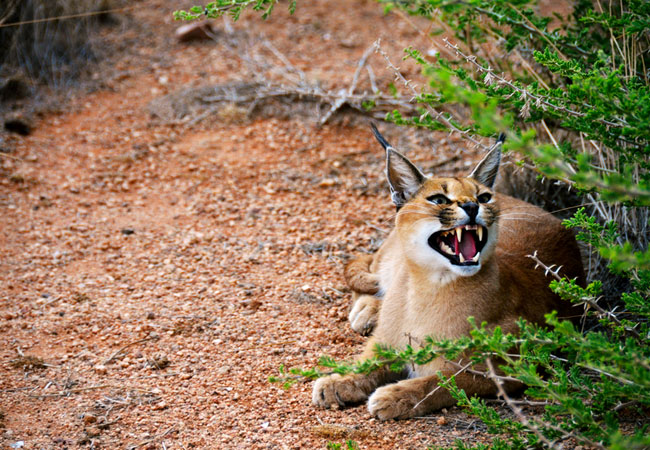 Found in open, dry country from semi-desert to savanna. They hide and sleep in crevices among rocks and fallen trees.

The Caracal is widespread and common throughout South Africa.

The Caracal feeds on rodents, small antelope, hares and birds and sometimes eats sheep and goats. It is mainly active in the morning and evening although during the hottest months it hunts at night. The Caracal can survive for long periods without drinking as most of the moisture it needs comes from the tissue fluids of its prey.

Caracal are mostly nocturnal creatures, secretive and solitary. When cornered they become extremely aggressive. As a result of being hunted by farmers (as they prey on small livestock), caracal have became even more elusive and the possibily of seeing them has become fairly difficult.

Sexual maturity occurs at about 20 months.