The banded mongoose is stocky and sturdy with a tail that is bushy and is practically as long as its body. Its grey-brown coat is thick and is characterised by bold black or dark brown stripes that run horizontally across the back.

Banded mongooses that live in wetter conditions tend to be darker and even bigger than those occupying dryer areas. The underside of the animal is slightly lighter than the upper side, while the legs and the snout are darker. It has a large head with small, broad ears, and its limbs are short and strong. The sharp, strong claws are an important feature that allows them to search and dig for food.

When creating a den, the banded mongoose favours termite mounds, rather than digging their own den. However, they will also accept rock shelters and warrens that are hidden under bushes. Their dens have several entrances to allow access by more than one animal, as well as better ventilation. These mongooses are known to change dens every few days. 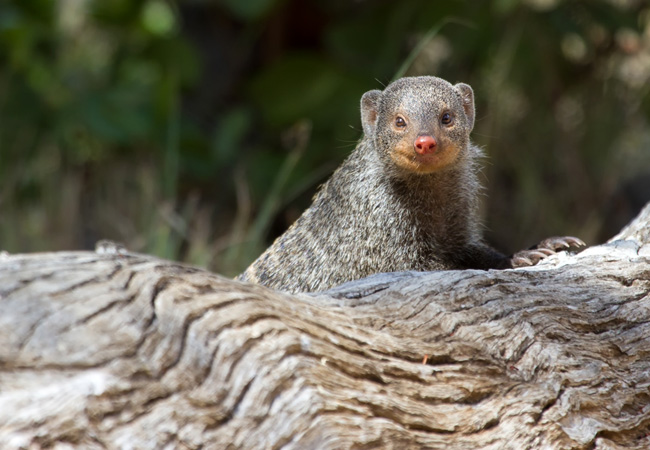 The banded mongoose is usually between 30 and 45 centimetres in length, with a fluffy tail that can reach up to 30 centimetres long.

Males weigh a little more than females during their juvenile years, but this tends to even out at maturity. Generally, these animals weigh between 1.5 and 2.5 kilograms.

The banded mongoose can be found in the open forests, savannahs and grasslands that yield the food and living conditions that it favours. They may also be found in thorny scrub, as long as they are close to an adequate supply of fresh water.

The banded mongoose occurs throughout southern and eastern Africa. In South Africa, it can be found only in the woodland savannahs that extend from the KwaZulu-Natal coast to the forests of the provinces of Mpumalanga, Limpopo and the North West. They are also found in Mozambique. A different population of the same species is found in Botswana and Namibia. There are also separate colonies in the grasslands of West Africa.

This animal has sharp teeth and nails, enabling it to dig out and hold onto the millipedes and beetles that form its primary diet. They will also feast on eggs (of a bird or reptile), small reptiles, ants, crickets, termites, earwigs, and other little invertebrates, should they happen upon them. When they occupy a rich agricultural region, the crops are sometimes added to their diet.

The banded mongoose is a very gregarious animal that enjoys its life in a social colony. Although they forage together, each mongoose is responsible for searching for its own food.

They have quite a complex social structure. They sleep together in dens that are concealed under the ground. They leave the dens at dawn and return at dusk; but will often spend the heat of the day in the shade of their burrow. They communicate with one another by a series of low grunts. They are not particularly aggressive, but may have the rare disagreement over food. They may also become a little aggressive when females are in oestrus. Aggression does, however, occur between groups of banded mongooses and has often proven fatal.

When the groups get too large, males and older females may evict other females, who will then go on to form their own groups.

A unique feature of this mammal is that the females all give birth on the same day. In rare cases, the birthing days may be one or two days apart. Females will produce an average of 1.4 litters per year, and will produce between 2 or 6 pups per litter. These pups are kept in the den for 3 to 4 weeks (nursed collectively) before they are allowed to join the rest of the group foraging and exploring the surrounds. Until this time, and when they just start leaving the den, they are guarded by adults (usually males). These ‘babysitters’ forge a bond with one pup and make it their job to protect and teach that pup.

The banded mongoose has a gestation period of between 8 and 9 weeks.

This animal has an average life span of about 12 years, but has been recorded to reach 17 years in captivity.

Wild dogs, snakes, birds of prey and jackals all present a danger to the banded mongoose.