South Africa has decided to withdraw from the International Criminal Court following a dispute last year over a visit by Sudanese President Omar al-Bashir who is wanted by the tribunal for alleged war crimes, crimes against humanity and genocide.

A copy of the “Instrument of Withdrawal,” dated Wednesday and signed by International Relations Minister Maite Nkoana-Mashabane, was obtained on Thursday by The Associated Press.

It states that South Africa “has found that its obligations with respect to the peaceful resolution of conflicts at times are incompatible with the interpretation given by the International Criminal Court of obligations contained in the Rome Statute” which established the court.

Under the Rome Statute, South Africa as a party to the ICC has an obligation to arrest anyone sought by the tribunal.

The charges against Bashir stem from the bloodshed in Sudan’s western Darfur region which began in 2003 when rebels took up arms against the government in Khartoum, accusing it of discrimination and neglect. The United Nations says 300 000 people have died in the conflict and 2.7 million have fled their homes.

In June 2015, Bashir went to South Africa to attend an African Union summit but the government didn’t arrest him. A court ordered him to remain in the country while judges deliberated on whether he should be arrested on the ICC warrants, but Bashir left for Sudan before the court ruled that he should indeed be arrested. The Supreme Court of Appeal later described the government’s failure to arrest Bashir as “disgraceful conduct”.

The government said in a statement in late June 2015 that it would consider withdrawing from the International Criminal Court as a “last resort” following the dispute over Bashir. It cited “contradictions” in the statute and said South Africa would have found it difficult to arrest Bashir because of treaty obligations to the African Union.

The African Union has asked the International Criminal Court to stop proceedings against sitting presidents and has said it will not compel any member states to arrest a leader on behalf of the ICC.

South Africa’s decision to quit the court follows Tuesday’s announcement that Burundi’s President Pierre Nkurunziza signed legislation to make his country the first to withdraw from the ICC, which had said it would investigate recent political violence there.

No country has ever withdrawn from the ICC, which was established to prosecute cases of genocide, war crimes and crimes against humanity.

Burundi’s decision to withdraw follows a bitter dispute with the international community over the human rights situation in the East African country. More than a year of deadly violence has followed Nkurunziza’s controversial decision to pursue a third term, which some have called unconstitutional.

According to South Africa’s document, its withdrawal will take effect one year after UN Secretary-General Ban Ki-moon is officially notified. 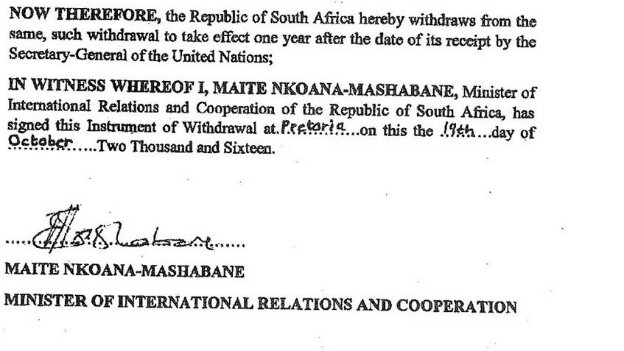 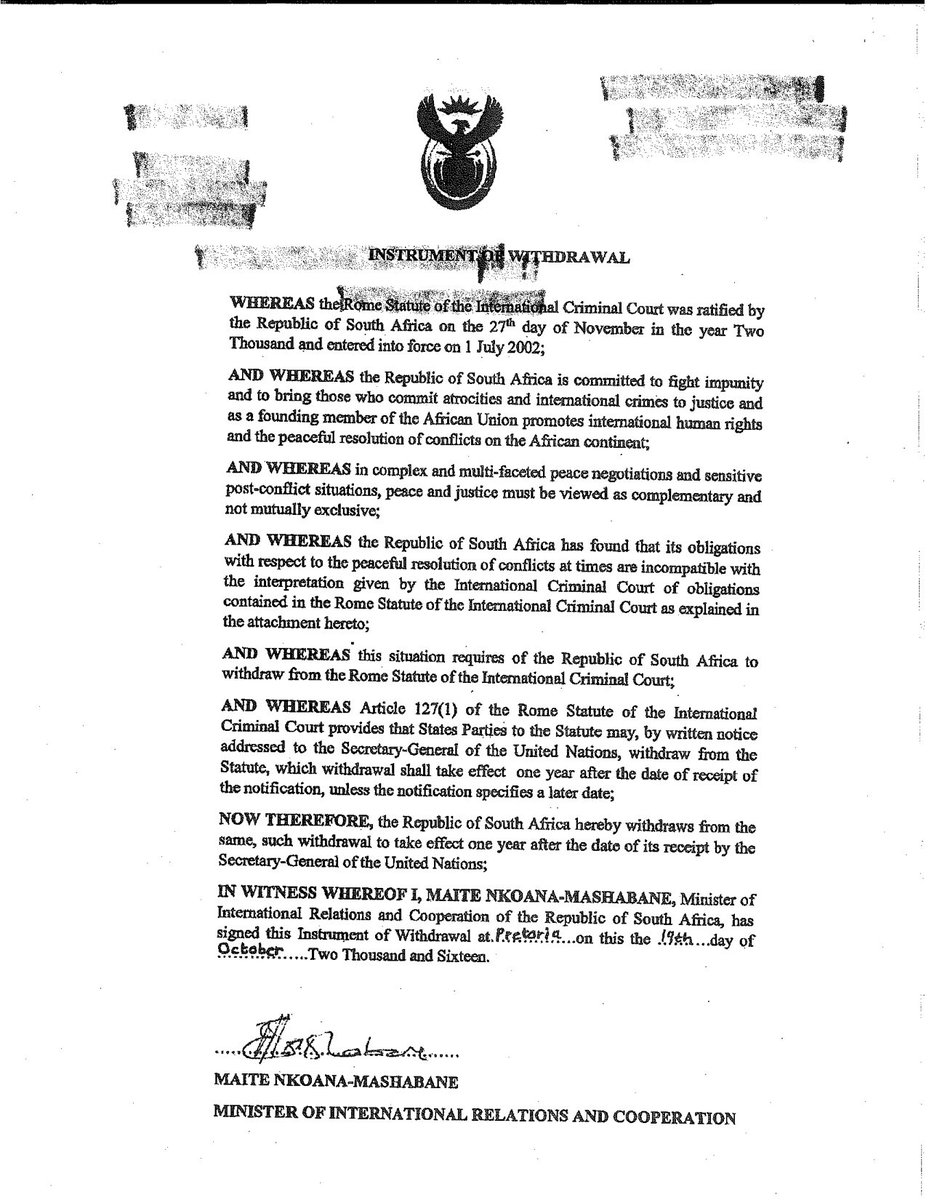