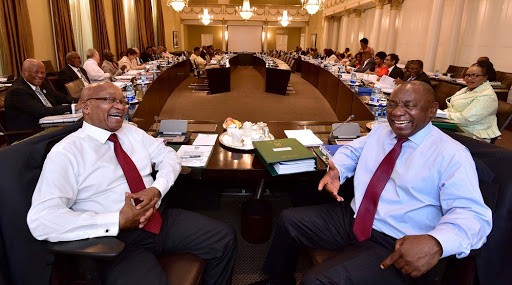 President Zuma has told some of his allies that he will not resign because he is angered by ANC leader Cyril Ramaphosa.

Zuma is of the view that Ramaphosa reneged on the agreement they reached last week that they would manage his exit in a way that keeps the ANC united.

Zuma apparently told some of his close supporters that when he had met Ramaphosa last Tuesday‚ they had agreed that he would deliver the State of the Nation Address and then embark on a joint roadshow to provinces to present a united front to the ANC. He committed to resigning in three months.

It is understood Zuma also said that he had not made demands for any type of immunity but that Ramaphosa had presented him with options for the state to cover his legal fees in exchange for his cooperation with the authorities. Zuma is now angry that Ramaphosa addressed the ANC caucus and briefed other people about their discussions‚ giving a different version of their agreement.

The ANC national executive committee decided on Monday to recall Zuma. The expectation was that he would abide by the decision of his political party and step down. But when the NEC decision was communicated to Zuma late Monday night by Ramaphosa and ANC secretary general Ace Magashule‚ the president was defiant‚ telling them he would respond to them publicly and gave no commitment to resign.

When Ramaphosa and Magashule returned to the NEC around midnight with Zuma’s response‚ it led to another round of protracted discussions until the early hours of Tuesday morning.

Magashule met Zuma at his residence in Pretoria on Tuesday morning to give formal notice of the NEC decision. It is understood that Magashule was also trying to convince Zuma not to publicly defy the ANC.

But Zuma’s refusal to resign means that he is daring the ANC to remove him through a motion of no confidence in parliament.

The president has apparently told his allies that there would be dire consequences for the ANC should they attempt to forcibly remove him.