Veterinarians from the University of Pretoria (UP) have carried out intricate surgery to remove an elephant’s infected tusk at a zoo in the former Soviet republic of Georgia‚ the university said on Friday.

The surgery was conducted at the Tbilisi Zoo‚ in Georgia‚ at the foot of the Caucasus mountains‚ on October 31‚ by UP vets professor Gerhard Steenkamp and dr Adrian Tordiffe.

The entire procedure from dart in to standing took four hours and 15 minutes. Of this‚ just over three hours was actual surgery time.

UP said the zoo had experienced “tremendous heartache” three years ago when it flooded within minutes and lost about 300 animals. They currently have a pair of Asian elephants and a 23 year-old bull‚ Grand‚ was a gift from the Yerevan Zoo in neighbouring Armenia four years ago.

When Grand was transported to the Yerevan Zoo from Russia‚ he fractured both his tusks‚ and had the left tusk removed in 2014 by a British team. Due to complications‚ the right tusk could not be removed. It became chronically infected and bacteria could have entered the bloodstream‚ which may have been life-threatening‚ the University of Pretoria said in a statement. 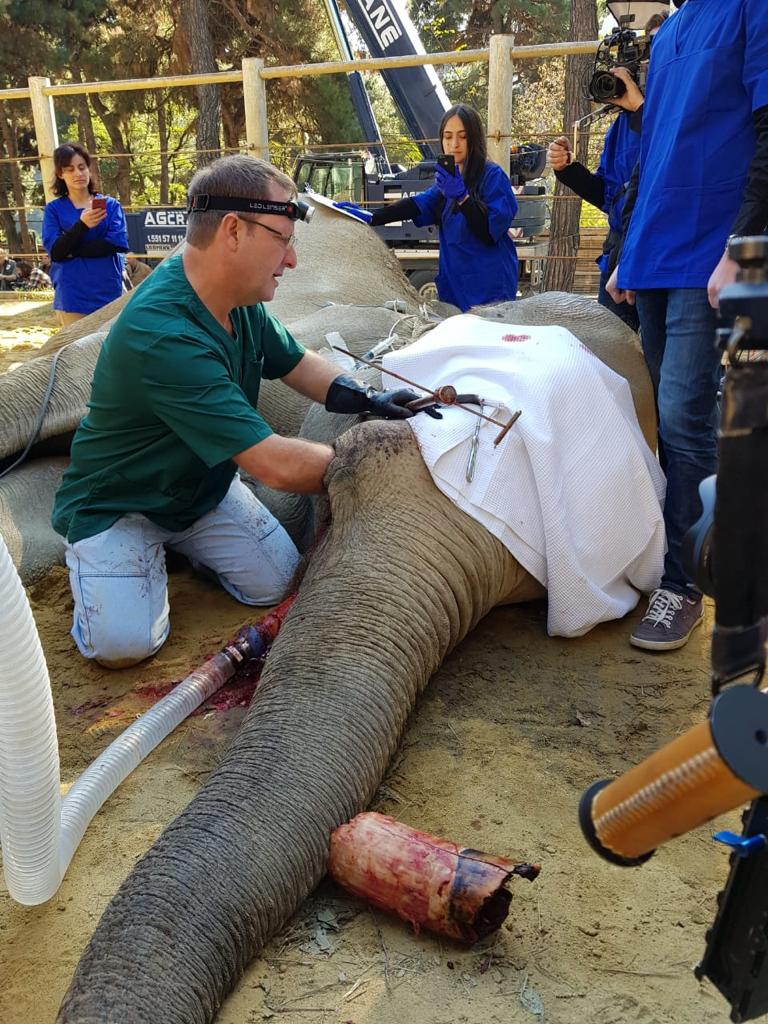 “Grand’s previous surgery had many complications. One of them was a protracted recovery time‚ and the zoo was reluctant to operate on him soon after that procedure‚” said Steenkamp‚ who teaches courses in dentistry and maxillofacial surgery of animals at UP’s faculty of veterinary science.

Steenkamp and Tordiffe have travelled the world treating elephants in Australia‚ Asia‚ Africa and Europe‚ and so they were called on to treat Grand.

Tordiffe‚ who gained experience in elephant immobilisations and anaesthesia while working at the Pretoria Zoo‚ has vast knowledge of anaesthetising elephants in small spaces‚ said UP‚ while Steenkamp has developed techniques to treat elephant tusks since 1998.

Commenting on this week’s surgery‚ Steenkamp said: “The anaesthesia and surgery went according to plan‚ and everyone was relieved when Grand stood on his legs four hour and 15 minutes later. His previous recovery from anaesthesia was very stormy‚ and was about six hours‚ and he took about 12 hours to stand. But this time it was only minutes until he stood.

“It was humbling when the whole crowd burst into applause when he stood. It was clear that this elephant meant so much to the people of Georgia‚ and they were so relieved for him.”

Prof Steenkamp said the medical team “was extremely nervous‚ as the drug we would normally use‚ Etorphine‚ is forbidden in Georgia. We had to use drugs we were not experienced in. The danger of the surgery is mainly to make sure that all the people involved are safe‚ as we are working with a dangerous animal. The surgery itself is not dangerous‚ but difficult and physically demanding.”

The university said zoo and wildlife dentistry is in its infancy within the international veterinary community.

Prof Steenkamp added: “Elephant immobilisation is taken for granted in southern Africa‚ as our veterinarians are often called to perform these procedures. Keeping an elephant anaesthetised for long periods of time is not so common and to gain experience in this takes time. When we look to zoos elsewhere in the world‚ elephant anaesthesia is not performed commonly at all. Dr Tordiffe therefore stands out as a leader in this field‚ and it is a privilege to work with him.”

Steenkamp‚ meanwhile‚ is an organising member of the Zoo and Wildlife Dentistry Certificate under the auspices of the American Veterinary Dental College. He is one of only 15 people in the world who holds this certificate‚ which recognises vets with expertise in zoo and wildlife dentistry.