One of the daughters of President Jacob Zuma of South Africa has mounted a legal battle to be awarded half her estranged multimillionaire husband’s estate in their already messy divorce suit. The woman – who by law may not be named – is claiming their antenuptial contract is invalid because they had a customary marriage before their civil marriage.

The Times of South Africa reported that should the judge agree with her claim, she will get half of her husband’s substantial estate, which is believed to include a private jet, various high-end properties, interests in eight companies and luxury vehicles including a Porsche 911 Turbo, a Range Rover, a Ferrari and two Mercedes-Benzes.

“No antenuptial contract was entered into between the parties prior to the conclusion of the customary marriage and, accordingly, in terms of the Recognition of Customary Marriages Act [it] is a marriage in community of property and of profit and loss,” Zuma’s daughter said in an amendment filed in the High Court in Johannesburg. 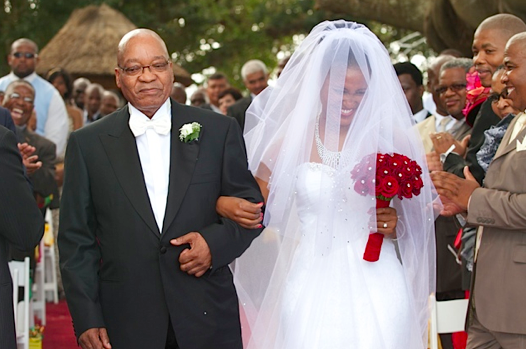 She asked for R113,200 in maintenance a month, which her husband – a successful businessman – rejected, offering her a little over half that figure. But in November she was granted an interim maintenance order of R168,000 a month for herself and their children.

In her latest filing, Zuma’s daughter said she and her husband agreed in 2010 to wed in a customary marriage. This was followed by a visit by the groom and his family to Nkandla for lobola negotiations, which were attended, among others, by Zuma, as the bride’s father.

In December that year the lobola, 16 cattle, were delivered to Nkandla. This was followed by the customary exchange of gifts between the families and the slaughter of a cow. Two months later the bride was delivered to the groom’s home in the Eastern Cape.

The couple then wed again in a lavish Parisian-themed ceremony that was described as South Africa’s wedding of the year. However, the fairytale fell apart early in 2014 when the husband moved out of the matrimonial home.

According to Zuma’s daughter, the breakdown of the marriage was due to her husband’s numerous “adulterous relationships with other women”.

In her papers the wife detailed how her husband had many cellphones and sim cards and sent and received “various intimate messages from other women”.

She said he had fathered a child with another woman and that she and the other woman were pregnant at the same time.

The husband has denied this, saying the cause of the strains in the relationship was his decision to buy a home for another woman – the mother of his two children out of wedlock – as well as his wife’s refusal to accept these children from a previous relationship.

Describing their lavish lifestyle, Zuma’s daughter said in court papers that in 2013 they had flown to London where he had spent about R500,000 on clothing and shoes for himself and for her. During international trips they stayed in five-star hotels.

“Money was limitless and there were no financial constraints placed on me until such time as the respondent left the matrimonial home,” the president’s daughter said.

Two watches – a R200,000 Cartier Roadster and a Breitling valued at R70,000 that she bought her husband as gifts – are also part of the divorce fight.

The husband’s attorney, Gary Mazaham, this week said they would oppose the latest claim. “We will obviously be denying. The intention of the parties before they even went through the customary processes was at all times to enter into an antenuptial contract,” he said.

“We are arguing that very clearly, the marriage as she initially indicated in her claim was a marriage governed by an antenuptial contract with the inclusion of the accrual system.

“The act in this regard makes provision for such a contract, and at all times that was the intention,” he said.

Divorce and criminal lawyer Billy Gundelfinger, acting for Zuma’s daughter, said the issues would be determined by the court and that the amendment relating to the marriage being in community of property and governed by customary law was brought in the “utmost good faith based on facts and circumstances which will be established at the trial”.

He added: “I’m confident that the averments made by my clients will sustain, and that an antenuptial contract had to be entered into prior to a customary or civil marriage, failing which the parties were married in community of property