With the ANC elective conference around the corner, the candidates in the running for the ruling party’s top job have seen their fair share of scandal and controversy.

Deputy president Cyril Ramaphosa failed in a court bid to gag the Sunday Independent from publishing an article about his alleged affairs.

Ramaphosa made headlines for all the wrong reasons when it was alleged he conducted numerous affairs with women to whom he had provided financial support.

He vehemently denied the allegations, as did his ex-wife, who spoke out against allegations that he is a supposed wife-beater.

One of the women said to have been having an affair with Ramaphosa denied ever having met him and was considering her legal options in the wake of the explosive allegations.

Nkosazana Dlamini-Zuma, the cigarette smugglers, and the Guptas

An illegal cigarette smuggler was reported to have contributed to Nkosazana Dlamini-Zuma’s campaign to become ANC leader, contributing branded clothing like caps and t-shirts, the Sunday Times reported.

The claims are contained in a new book by veteran journalist, Jacques Pauw, The President’s Keepers.

Pauw links Adriano Mazzotti – a cigarette manufacturer who previously confessed in an affidavit that his company, Carnillinx, had entered into some corrupt and unlawful transactions in order to drive up business – to the presidential hopeful.

The paper reported that Mazzotti boasted about his relationship with Dlamini-Zuma, posting pictures of them together.

In the run-up to December, Dlamini-Zuma has denied having ties with the controversial Gupta family.

She said in a statement she was not aware nor was she officially informed of a letter, presumably written by Lord Peter Hain, which alleged some financial misconduct involving illicit financial flow.

The former African Union chairperson said she had no links with any of the Gupta associated businesses, except for the finances received for the South African Person of the Year Award, which she received.

Dlamini-Zuma said was this case with many prominent South Africans who were acknowledged at the award ceremony.

The president’s former wife now serves as an ANC MP.

Jeff Radebe dismissed comments made by party veterans that he was not fit to be president.

The veterans said the presidential hopeful never apologised for a sex scandal he was embroiled in.

In May, Radebe was caught out sexting with a 29-year-old staffer at the Union Buildings.

The woman blew the whistle on Radebe after her bosses accused her of insubordination.

A chilling video of ANC members firing guns recklessly in a crowded area has surfaced.

Phosa claims the group has been disrupting the general meetings of branches that do not support Mabuza’s unity campaign.

He has confirmed he is filing an urgent court application to nullify the province’s nomination process.

Lindiwe Sisulu has kept her race pretty clean but did put her foot in it badly when speaking about President Jacob Zuma’s rape accuser, Kwezi.

Sisulu on Thursday said she has taken personal responsibility for the appointment of President Jacob Zuma, but doesn’t think blame should be assigned to individuals.

Sisulu, in an interview with 702’s Eusebius McKaiser, spoke on her role in the appointment of President Jacob Zuma, the president’s rape scandal and her candidacy for the presidency.

“I believe she believes she was raped,” Sisulu clarified and said she did not have sufficient evidence to make a decision on whether Khwezi had actually been raped.

“I know both parties firmly believed what they said.”

President Jacob Zuma was acquitted of the rape charge in 2006.

The ANC leadership battle took very public, very ugly turn in October with leaders engaging in a Twitter war (Twar) with each other.

ANC secretary general, Gwede Mantashe and Presidential hopeful, Lindiwe Sisulu, let rip on Twitter, taking each other on about leadership of the ruling party, the state of the party, gender issues, and everything else.

Baleka Mbete: so close, yet so far…

Baleka Mbete’s record is as squeaky clean as one can hope for in a politician.

She will go down in history though as the Speaker who came the closest to becoming President after she gave the go-ahead for a secret ballot in the latest motion of no confidence in President Jacob Zuma, contrary to her party’s position.

Had the vote succeeded, she would have become President as Speaker of Parliament.

The ANC Women’s League, who are ardent supporters of Nkosazana-Dlamini-Zuma, have been outspoken about their opposition to Mbete and Sisulu to their preferred candidate.

The DA’s John Steenhuisen did, however, call on Mbete to get therapy earlier this year – after she told him in Parliament he needed anger management classes. 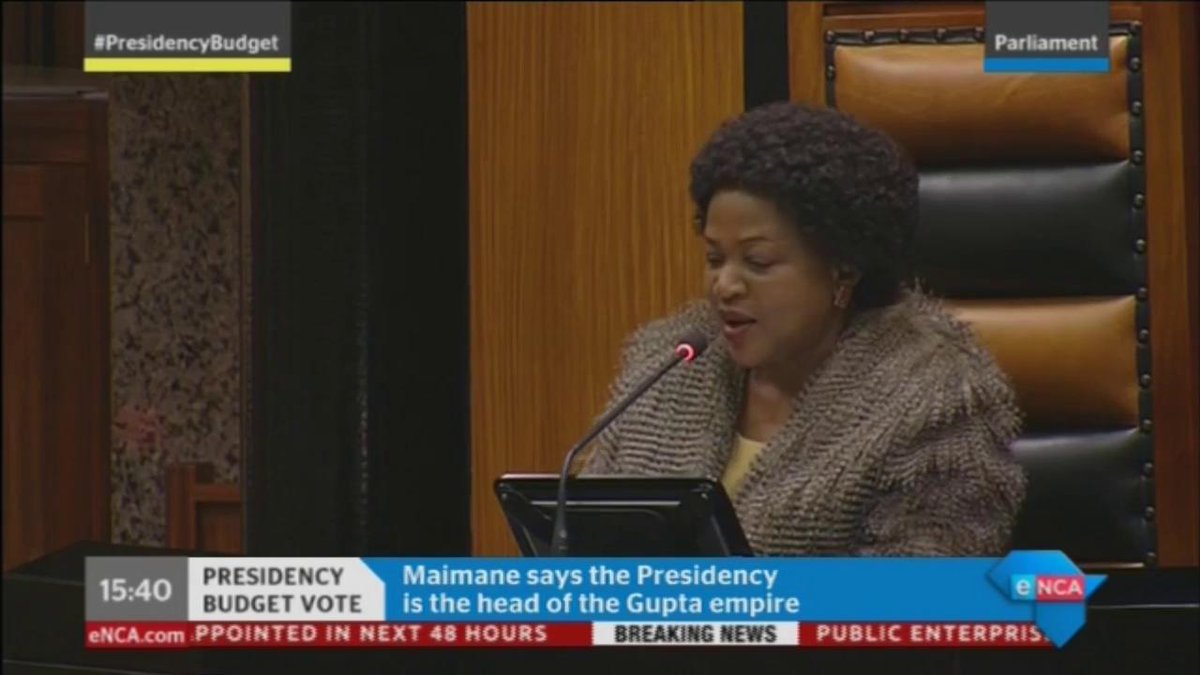