South African police have raided the residential compound of a wealthy business family described as some of President Jacob Zuma’s closest allies.

Agents from the Hawks, an elite police investigative unit, entered the Gupta family compound in Saxonwold, an affluent neighborhood in Johannesburg on Wednesday. 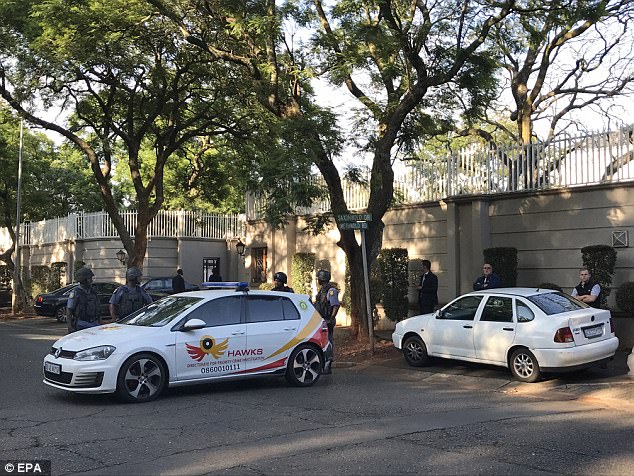 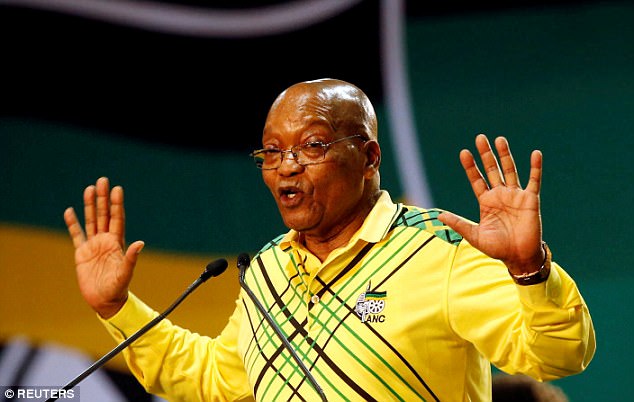 Hand’s up: President Jacob Zuma has been accused of corruption and has been ordered to step down by the ruling party, the African National Congress

The early morning raid resulted in three arrest, at least one of whom are a Gupta family member, the South African state broadcaster reports.

Police also raided the Guptas’ Oakbay holding company in Johannesburg’s Sandton financial district, according to a security guard outside the building.

It marks a dramatic escalation in the pressure on Zuma and the political faction around him accused of milking state resources for their own ends.

Zuma was ordered to step down by the ruling African National Congress (ANC) on Tuesday, but no firm deadline has been given and, it remains unclear whether the 75-year-old will throw in the towel, or dig in deeper.

The raid came amid reports Zuma was preparing to tell South Africa he was stepping down after nine years in office dogged by scandal and economic stagnation. 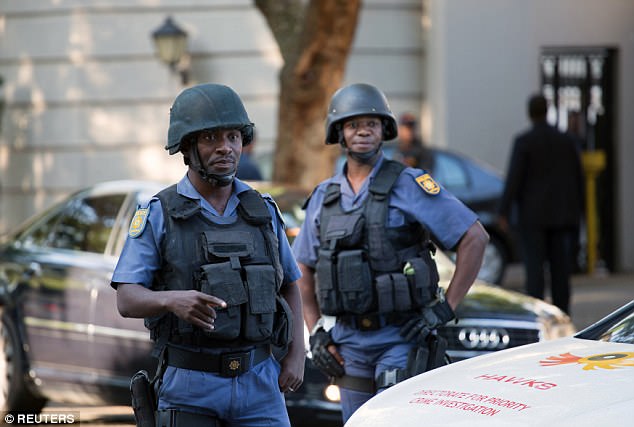 Best buds: Police close off roads around the home of the Gupta family, whose relationship with Zuma is so close they have their own portmanteau – Zupta 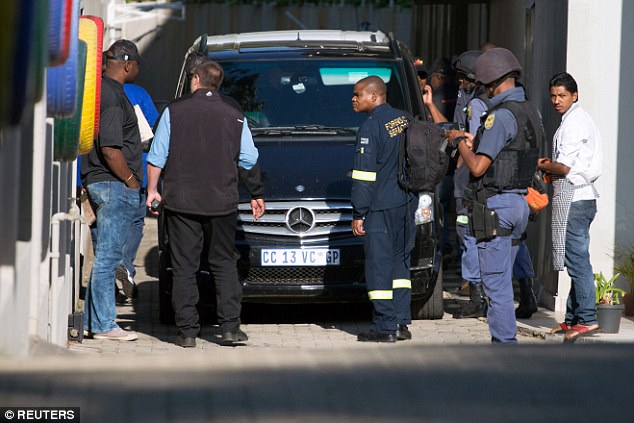 Police raid the home of the Gupta family, friends of President Jacob Zuma, in Johannesburg, South Africa, on Wednesday morning

Finance Minister Malusi Gigaba said Zuma would speak this morning, and satellite trucks were in position at Pretoria’s Union Buildings, the seat of the country’s government.

Zuma’s office however, said there was no ‘official communication’ of any impending address but urged media to wait.

Both President Zuma and the Guptas, who are so close their relationship has its own portmanteau; ‘Zupta’, deny any wrongdoing.

The family is headed by millionaire Indian-born brothers Ajay, Atul and Rajesh ‘Tony’ Gupta who arrived in South Africa in the early 90s, shortly after the end of apartheid.

They set up tech company Sahara Computers, and their commercial empire now stretches from mining to media.

Two of Zuma’s children have worked as directors of Gupta-owned companies, and one of his wives, Bongi Ngema-Zuma, was a communications officer at another. 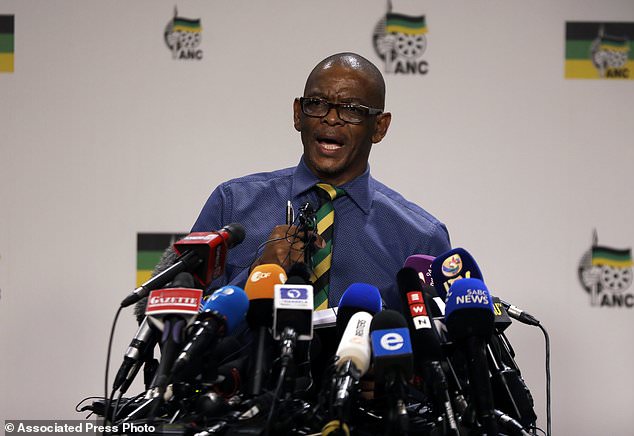 Secretary General of the African National Congress, (ANC) Ace Magashule is seen staying on Tuesday  that Zuma must leave office

The Guptas have been accused by two senior ANC politicians of offering them government ministerial posts, which the family and Zuma denies.

They have also been allegations that the family paid for a mansion for Mrs Ngema-Zuma and demanded to be given diplomatic passports, both of which they also deny.

What the Gupta’s cannot deny however, is the 2013 incident which saw them use a government military airbase near Pretoria to fly in guests to a family wedding.

This caused a political storm and the Guptas, who later apologised, were accused by both the ANC and the opposition of abuse of power.

A lawyer for the Gupta family said he could not comment on Wednesday’s raid because he had yet to see the search warrant.

Hawks spokesman Hangwani Mulaudzi said the raid was part of an investigation into allegations of influence peddling. The allegations are also the subject of a judicial inquiry on wider corruption dubbed ‘state capture’ in local media.

‘We’re not playing around in terms of making sure that those who are responsible in the so-called state capture, they take responsibility for it,’ Mulaudzi said.