Masilela allegedly stated he paid damages to the Dlamini family since he wanted the child to carry his surname. He also allowed Dlamini and the child to stay in his house in Bramley.Speaking to Sowetan, Masilela revealed he had gone to evict Dlamini from the house on Saturday night when the fight broke out.

“There was never any intent on my part to do any harm to her. My wife was informed”.

“The content of the discussion and her calling my wife, only to realize she knows about our meeting, led to her uncalled for outburst. In the course of the altercation and while defending myself, she might have been hurt. Nothing persisted to show intent on my part. I feel the matter can be resolved without it being for public consumption. She threw a glass of wine and hit me with many objects,” he added.

Dlamini’s  pictures of the alleged abuse surfaced on social media after they were leaked by someone close to her.

Here are the pics 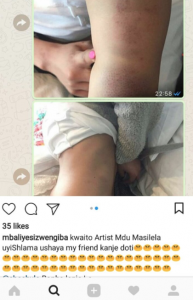 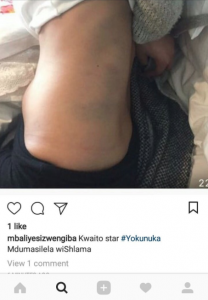 According to the publication, Masilela has since offered an apology to all women in the country.

“I’m not proud of what happened over the weekend and I wish to extend my apology to women all over South Africa and the world. There are better ways to deal with disputes and disagreements.”