A Muslim member of the South African National Defence Force (SANDF) has landed herself in trouble for a controversial reason. The major is set to be charged in a military court on Tuesday after she failed to remove her headscarf under the instruction of a senior colleague.

According to a statement shared by anti-crime advocate Yusuf Abramjee, formal charges will be brought against the woman at the Castle of Good Hope. Nazeema Mohammed is acting as the defendant’s spoke person, and she has argued the case for the persecuted major.

SANDF: The argument for keeping a headscarf on

The decision to ask for the removal of the headscarf has left the SANDF member and her defence team rather perplexed. They have argued that the garment does not obstruct any military insignia, nor does it cover up important markings that indicate rank or decoration.

What is more, the headscarf is worn underneath the standard-issue army beret. So Mohammed’s client is no more “covered up” with or without it. Being asked to remove it is seen as a violation of her right to religious freedom.

“She is being charged for failing to obey lawful obstruction from her colonel, because she refuses to remove her headscarf. She will be appearing [at the Castle of Good Hope] on Tuesday where her rights will be read to her”

Who is the Muslim major in trouble?

We understand that the SANDF member facing the dock works as a clinical forensic pathologist at 2 Military Hospital in Wynberg. According to News24, this is the first time in a 10-year career that she’s been given such instruction, and she’s standing firm on the issue no matter what happens.

If a guilty verdict is reached, Mohamed has vowed to take this case to South Africa’s judicial system and have it hammered out in a court of law. The advisor believes the decision to punish the major is “sexist”, and ultimately “Islamaphobic”. SANDF are yet to comment on the issue. 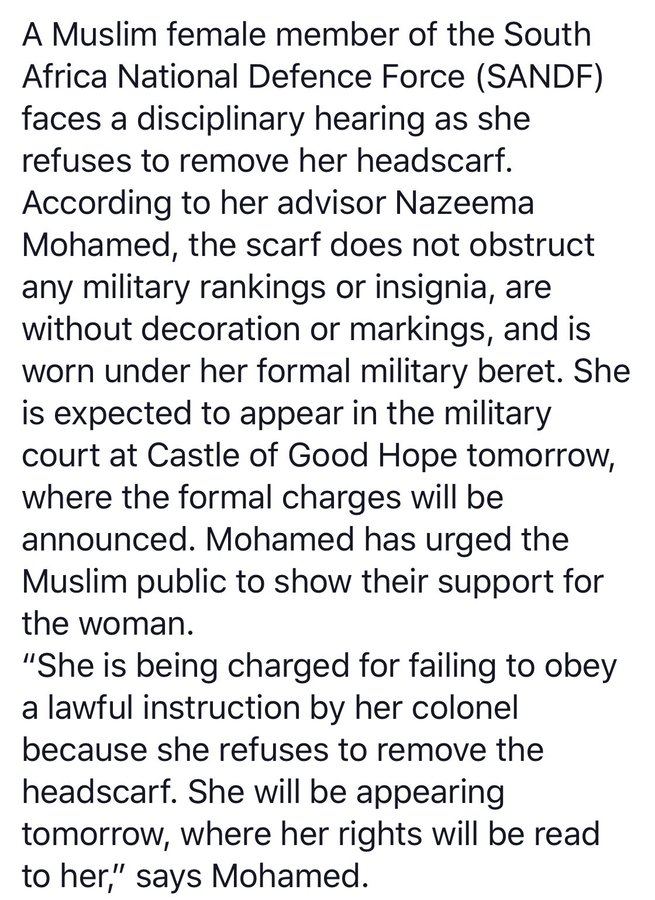