A British pilot has become the world’s youngest commercial airline captain at 26, as she flies routes with the UK’s youngest pilot aged just 19.

A British woman has become one of the world’s youngest commercial airline captains at the age of 26. Kate McWilliams, from Carlisle, said she is asked about her age by cabin crew and passengers almost daily and most people are “pleasantly surprised and impressed” when she tells them.

McWilliams began flying in the air cadets aged 13 before going on a training programme at CTC Aviation in Southampton on her 19th birthday then joining easyJet as a first officer in May 2011. She recently rose to the rank of captain after passing the airline’s command course. An easyJet spokeswoman said the budget carrier believes McWilliams is the world’s youngest commercial airline captain.

McWilliams said: “Personally, I don’t think my age matters. I’ve been through the same training and passed the same command course as every other captain, so I’ve proven myself capable regardless of my age. I do now get asked how old I am on an almost daily basis, which didn’t used to happen when I was a first officer.”

McWilliams lives in Reigate, Surrey, and is based at Gatwick airport. She flies Airbus A319 and A320 planes to about 100 destinations, including Reykjavik, Tel Aviv and Marrakech.

McWilliams said that when she was growing up, she did not think it was an option to become a commercial pilot, but she has “never looked back” since beginning her training. “I love being a commercial pilot for easyJet and I am proud that I have now achieved my ambition of becoming a captain,” she said.

Only 5% of commercial pilots are women and last year easyJet announced aninitiative to double the proportion of new female entrants to 12% over two years.

Julie Westhorp, the chair of the British Women Pilots’ Association, said she hoped that McWilliams’ progression would inspire more women to consider a career in aviation. She went on: “Both the BWPA and easyJet are aware of the importance of visible role models for girls and young women when making career choices and continue to work together to encourage young women to consider a pilot career.

“Kate’s achievement clearly demonstrates to other young women that it is possible to succeed as a pilot in commercial aviation. We wish Kate continuing success in her career and are delighted that she is now an excellent role model for other females.”

Michael Crowley, of Boca Raton, Florida, was promoted to the role of captain with SkyKing, a charter carrier, in 2012, at the age of 24. He flies Boeing 737s between Miami and Cuba. 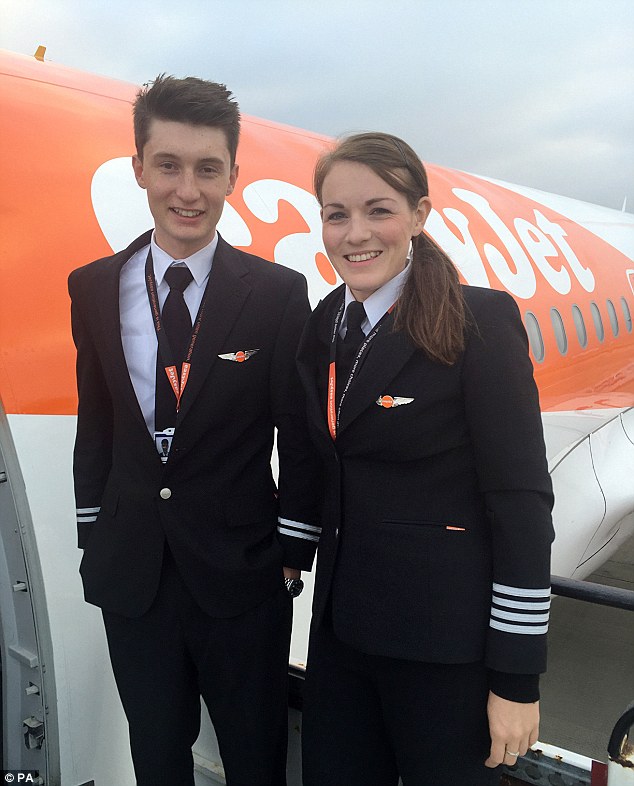