Fred Bridgland, the author of a controversial new book about Winnie Mandela, Truth, lies and alibis, has slammed suggestions that he is an “apartheid apologist” insisting that if people read the book, they’d see that “there’s not a word of endorsement of apartheid.”

The book made headlines on Tuesday after a letter penned by Redi Thlabi to the publishers, accusing them of using her name as a “fake shout-out” to endorse its contents, went viral.

The book lists quotes on its back cover by Thlabi, Sisonke Msimang, Palesa Morudu and Aubrey Matshiqi. It credits the quotes to various publications, including Sunday Times, Business Day and Mail & Guardian. The quotes are from previous articles that were published in those publications. 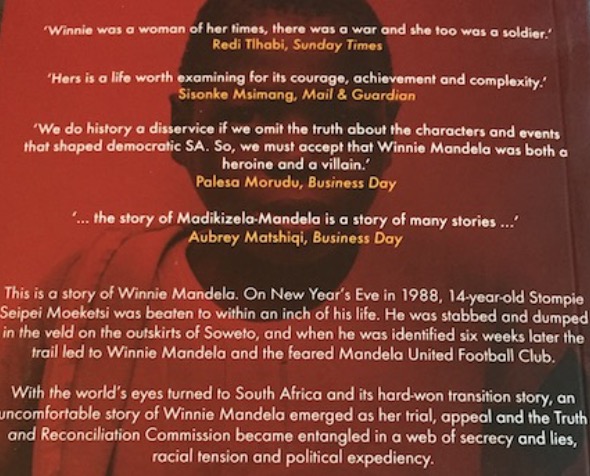 The publishers of the book, Tafelberg, have since apologised for the “distress” caused and said it would be taking steps to remove the quotes and repackage the cover.

(1/2) Tafelberg apologises unreservedly for causing distress with the quotations on the back cover of the recently released Truth, Lies and Alibis. We are in the process of making amends and are contacting the affected journalists. pic.twitter.com/Bn5EjDgmHm

Bridgland, meanwhile, told us that he was not consulted about the inclusion of the quotes on the back cover and was “in complete sympathy with the distress and anger caused.”

“I can’t apologise because I wasn’t consulted and I would not have approved of them unless the authors had been consulted.”

It has come to my attention that a new book about #WinnieMandela written by an apartheid apologist has a blurb on the back taken from an article I wrote in the M&G. This is a sneaky marketing effort and I do not endorse the book. I will be writing to the publishers formally.

“It’s untrue. The person who made the allegation has never met me. If they read the book, they would see that there’s not a word of endorsement of apartheid. It makes it clear – apartheid was an appalling system.”

Bridgland said the book was “less about Winnie Mandela as you see in the introduction, but more about the little and unimportant people who suffered, and sometimes died, at the hands of the Mandela Football Club.”

“I’m a journalist. My job is to report without fear or favour. I only urge the people who have accused me of being an apologist to read the book. There’s not a single line where I have endorsed it. In fact, there’s a whole chapter entirely devoted to how Winnie was treated appallingly by authorities.”