South Africa’s richest are growing richer as the country sinks deeper into debt. A new report names South Africa, Russia and India as among the countries that have bucked the trend of wealth concentration decreasing in emerging markets over the past few years. The findings will come as little surprise to anyone who surveys South Africa’s towns and cities: vast swathes of people live in squalid conditions while small clusters of very wealthy people live in leafy enclaves. Making significant strides in helping the middle-class to grow its wealth, meanwhile, is China. The report’s authors say that China is “the main pillar propping up the global middle class”. They predict that “the rapid growth in the global middle class could well continue over the next few years as long as more countries can manage to follow in China’s footsteps and exploit their full potential”. The report will be good news to investors pinning their hopes on China continuing to play a key role in driving global economic growth. Turning to South Africa, with its close ties to China, it is a pity its leaders haven’t paid closer attention to emulating the economic miracle that has lifted millions of people in the Middle Kingdom out of poverty and nurtured a thriving middle-class. – Jackie Cameron

At 48% South Africa has one of the highest debt as a percentage of GDP among emerging market economies, according to an Allianz Global Wealth report.

“In Latin America or Eastern Europe, for example, no country can match South Africa in this regard.

The Allianz Global Wealth report – the seventh of its kind – puts the asset and debt situation of households in more than 50 countries under the microscope. Based on the findings of the report, it seems that the good years are a thing of the past.

Global financial assets increased by only 4.9% in 2015, slightly above the growth rate of economic activity. In the three previous years, financial assets grew at twice that pace, with an average rate of 9%. 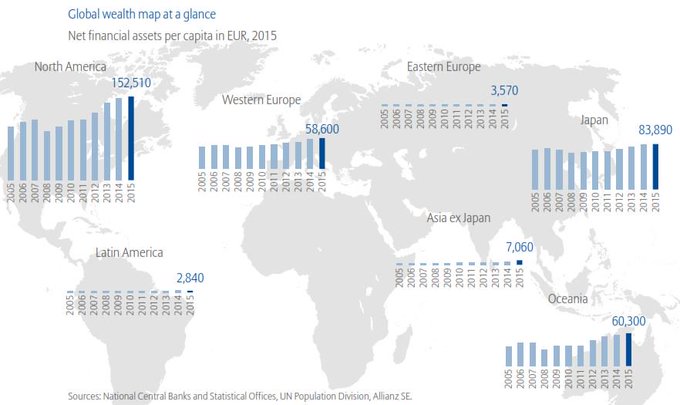 South Africa’s liabilities, however, increased by 5.7% – slightly faster than the previous year. “Although debt growth has dropped a notch or two after the financial crisis, in the last years it continued to grow steadily and as a consequence the debt pile has doubled since 2007.”

According to Allianz, Scandinavian and Asian countries currently dominate the net financial assets per capita list.

Globally, the wealth report shows a mixed picture. The strong growth in emerging markets in recent years boosted economic participation among people and created a new middle class and in tandem with this, poverty levels have dropped significantly.

The growth in financial assets in industrial countries, such as in Western Europe (3.2%) and the United States (2.4%) has slowed down and has more than halved in 2015.

At the other end of the spectrum is Asia (excluding Japan, however) where financial assets expanded by 14.8%. The region’s lead over the rest of the world is only getting bigger. This also applies to the world’s other two up-and-coming regions Latin America and Eastern Europe where the average growth was only half of that in Asia.

“The days in which regions were able to keep up with their counterparts in Asia are long gone,” the report said.

Michael Heise, chief economist at Allianz, said the growth of financial assets have reached a critical juncture. “Extreme monetary policy is losing its impact even on asset prices. At the same time, interest rates continue their remorseless slide, deep into negative territory. For savers, the outlook is not rosy,” Heise said.