The MTV Africa Music Awards Johannesburg 2016 was delivered to us in great style by Joburg Tourism in partnership with Absolut Vodka, Google and in association with MTN and DSTV.

A day to the MAMAs it was announced comedian, Trevor Noah had to drop his hosting duties due to respiratory and ear infection (a real shame as we were looking forward to his jokes).

Queen B of Africa, Bonang Matheba stepped up to the plate in less than 24 hours with co-hosting duties by our very own Mama Africa, Yemi Alade.

Between the ladies, from the red carpet, they must have had at least 8 – 10 costume changes showing off different outfits by African designers.

Patoranking picked up another coveted award, the Song of Year for his song with Black Diamond Wande Coal (My Woman, My Everything) and Yemi Alade breaking through as Best Female withTekno picking up the Best Breakthrough award.

International artist, Future came through performing some of his hit songs, and mid performance he called out South African rapper Nasty C on stage too. 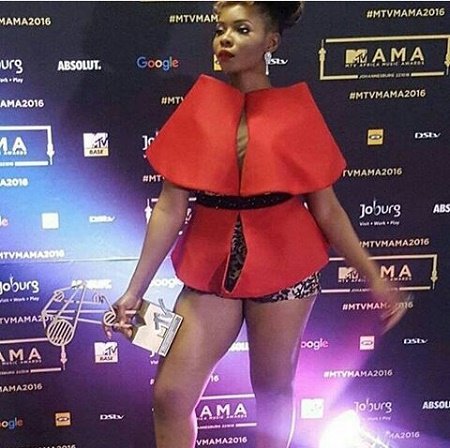 Yemi Alade wins MTV MAMA 2016 Best Female
Much to the delight of those who could not attend, MTVMama2016 was streamed live on Facebook.