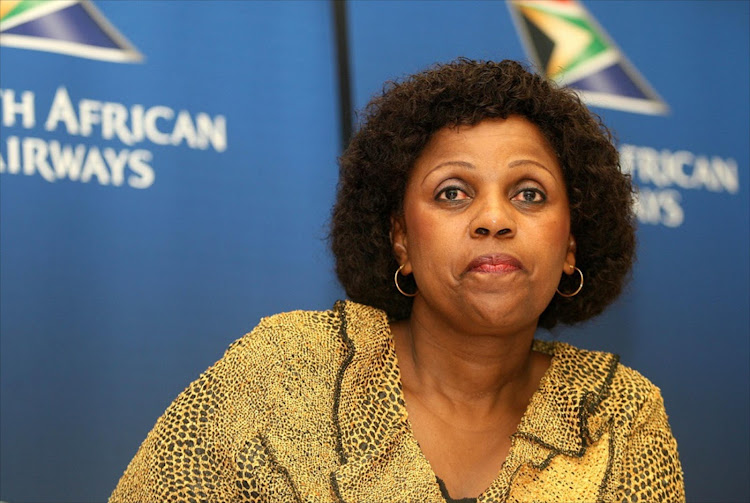 Just a few months after she was fired from being the chairperson of South African Airways SOC Limited, Dudu Myeni has gotten for herself an enviable job as the special adviser to the Transport Minister Joe Maswanganyi.

She was fired in October this year in what could be a range of changes made to the leadership of the financially crippled state own enterprise.

The Transport Minister Joe Maswanganyi confirmed Myeni’s appointment, describing her as ‘highly recommended’ was could not say who made the recommendation.

“I needed someone with aviation experience …  I appointed her as one of my advisers because as a minister I am allowed to appoint a maximum of three advisers without advertising the posts,” he said.

This comes amid another disturbing report about the South African government planning to move the SAA from National Treasury to the Department of Transport.

The Democratic Alliance has responded to this, saying if the government proceed with its plan it would avail Dudu Myeni another opportunity to meddle with the SAA affairs.

The DA’s Alf Lees said: “One of the bigger problems is that SAA is now proposing to be moved from National Treasury to Transport. What that would do, would be to put SAA back under the influence of Ms Myeni.”

“What makes such a proposal even worse is the news that disgraced Dudu Myeni has been appointed as a “special” advisor to Transport Minister, Joe Maswanganyi, a close ally of President Jacob Zuma. Despite any rules that may preclude her from interfering in SAA affairs, Ms Myeni will likely ignore these and meddle in the affairs of the airline,” he said.

The DA also said it would write to all South Africa’s top banks that are owed the R13.8 billion guaranteed by the poor people of South Africa. We will request that they immediately inform Finance Minister, Malusi Gigaba, that they will recall their loans to SAA with immediate effect should the proposal to move SAA away from National Treasury be affected and if there is any pressure put on the SAA board and CEO to run the airline as anything but a commercial enterprise.

“South African banks must ensure that SAA is run on purely commercial lines. They cannot allow SAA to once again become Myeni’s plaything as poor South Africans will suffer the effects of billions of rands in losses as vital services will be forfeited in order to fund the failing airline.”

South Africa’s top banks have also responded to the Dudu Myeni’s latest appointment and the government’s new plan for the SAA, saying this would see them recall R8-billion in loans to the cash-strapped state-owned entity.

According to reports by Sunday Times, the banks and Investec have written to SAA introducing the new loan agreement that changes to its shareholder would trigger a recall.