THE HAGUE, NETHERLANDS - JULY 23: View of the International Criminal Court as Dutch prosecuters consider a war crimes investigation of the Malaysia Airlines crash July 23, 2014 in The Hague, The Netherlands. Malaysia Airlines flight MH17 was travelling from Amsterdam to Kuala Lumpur when it crashed killing all 298 on board including 80 children. The aircraft was allegedly shot down by a missile and investigations continue over the perpetrators of the attack. (Photo by Michel Porro/Getty Images)

In a move that comes as a surprise to many, South Africa has announced it is pulling out of the International Criminal Court and has initiated the withdrawal process. This comes on the heels of Burundi’s announcement that it was leaving the court.

A written notice of South Africa’s intention was submitted to the UN secretary general, said Tshililo Michael Masutha, the country’s justice minister. The withdrawal from the international court will be formalized one year after the notification.

The court in the Hague, Netherlands, comprises 124 states from around the world. The ICC is the “court of last resort” and tries four types of crimes: genocide, crimes against humanity, crimes of aggression and war crimes. The court was created by the Rome Statute, a treaty first brought before the United Nations. In recent years, African leaders have complained of bias in the court’s activities as most of its cases have been against African leaders.

All six current prosecutions or prosecutions in the process are of Africans, and so far, the ICC has not indicted or pressed charges against any other people from any other part of the world. South Africa has complained of interference from the ICC, a case which began when the court requested the arrest of Sudanese president, Omar Al Bashir who was in South Africa last year for a meeting of African leaders on charges of war crimes, crimes against humanity and genocide stemming from the conflict in the Darfur region in western Sudan. 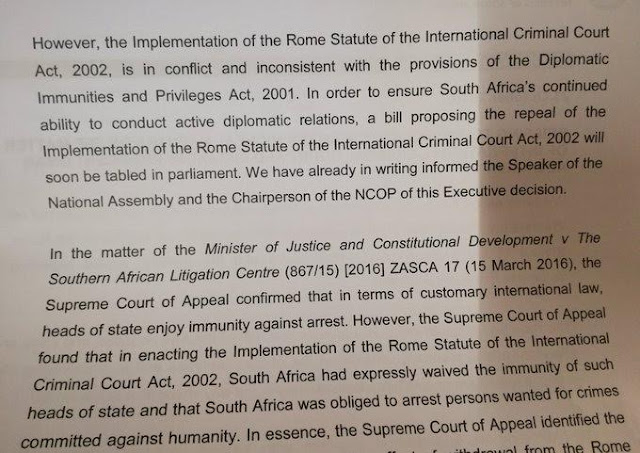 South Africa’s justice minister added that the country remains committed to holding those who committed crimes against humanity accountable, and that it intended to work closely with the African Union and other African countries.

The ICC’s 124 members is made up of 34 African nations, heavyweights such as America, China, Israel and Russia are signatories but are not active members.