“I am deeply honoured and humbled to have received the call to serve as a Minister of South Africa’s new cabinet,” De Lille said in a statement.

“I have fought for justice in our country for more than 40 years and have no plans to give up fighting.

“I pledge to continue the struggle for dignity and fairness for all South Africans.”

De Lille went on to thank her supporters, “I want to thank all my colleagues in the Good movement, and all who voted for Good, for their hard work and belief that change is possible, that the country we dreamed of 25 years ago is achievable.”

The minority party leader vowed to make a difference, saying, “I will be joining President Ramaphosa’s executive with open eyes and ears as a representative of good South Africans of integrity who love their country and demand better of their leaders. It is time for South Africans to demonstrate that we can rise about party differences.” 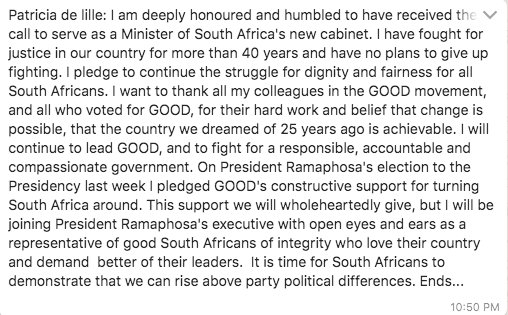