A machete wielding assailant on Saturday made his way on stage forcing local musician Berita to cancel her scheduled performance at Kwanokuthula stadium in Plettenberg Bay. Berita and her team escaped unhurt.

In a statement released by Vth Season, Berita’s managers, they said: “Due to a security threat that occurred on Saturday night, Berita was unable to complete her set at the Kwanokuthula Stadium in Plettenberg Bay.

“Berita and Vth Season would like to extend their apologies to the excited 2000 fans that come out to see Berita perform, where she was the headliner and only performing act on the line-up.

“Two songs into Berita’s performance, a man with a machete made his way on stage and started cutting sound cables before proceeding to follow Berita with the knife. Berita and her manager, Ninel Musson, who was with her at the time, both managed to escape unharmed.” 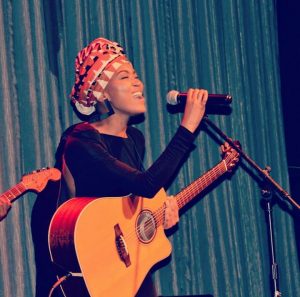 Ninel Musson, the manager, described the attempted attack as one of the scariest incidents. “It was one of the scariest incidents I have experienced at a show. I was with Berita and we are both grateful to have escaped alive and unharmed. We regret that Berita was unable to complete her set as the crowd in attendance were extremely excited to see her perform and many traveled from far to witness the African Jewel live.”

Even after the incident, Berita wanted to go out and perform to the thousands of her fans who had thronged the stadium, but was told not to.

The suspect, is still at large.