The 52-year-old is currently facing assault charges following a bloody attack on a 20-year-old South African model who was said to be hanging out with Mrs Mugabe’s two sons.

“We, in terms of South African Police, already put tabs in the borders in relation to her leaving the country, so there is no question about that,” said Mbalula.

We, in terms of South African Police, already put tabs in the borders in relation to her leaving the country, so there is no question about that. So tabs have been put, a red alert has been put.

“So tabs have been put, a red alert has been put, so she is not somebody who has been running away,” he added.

South African police had earlier confirmed that Grace Mugabe remained in the country despite reports that she had returned to Harare. 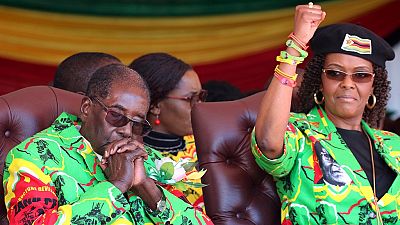 The case is now hanging on diplomatic ropes after she was said to have applied for diplomatic immunity after the attack on Gabriella Engels in an upmarket Johannesburg hotel.

Mbalula who was speaking on the sidelines of a gender violence event in Pretoria stressed that the issue was now with the Department of International Relation and Cooperation (DIRCO) but Police was on stand by to enforce the country’s laws to the latter.

“There has been an exchange since the day I announced she would appear in the Wynberg Magistrate’s Court, which was an agreement, she didn’t appear up until the point now, where issues of immunity must be attended to.”

“Anyone that comes to South Africa must know we are a constitutional state and a law state and nothing will just be left.”

Wife of Africa’s oldest political leader had failed to appear at a court hearing on Tuesday relating to the allegations that she attacked Gabriella Engels with an electric extension chord.

Hinting at a potentially serious diplomatic rift between the southern African neighbours, police said Harare had asked that Mugabe be granted diplomatic immunity but made clear she would be “processed through the legal system”.

Mrs Mugabe has been charged with assault after allegedly beating up a model who was in the company of her sons in a hotel room in Johannesburg.